Al Ahsa (or Al Hasa) lies in the south of the Kingdom's Eastern Region and is bounded by the Al Dahna and the Al Daman deserts. It has 1.5 million inhabitants. In Ancient times, it was at the center of the trade routes that traders followed between the east of the Arabian Peninsula and India, Persia and the Far East. The place is usually called Ha'sa by locals, which means the sounds of water in classic Arabic. It has one of the best Date Palms in the world. The municipality of Al Ahsa constitutes the largest administrative area in the Kingdom.

Oil production and agriculture are the main economic activities in Al-Ahsa. The region features 10,000 hectares of agricultural lands, with two million palm trees. Ghwar Oil field, the largest one in the world, is also located in the region. There are 21 thousand tons of dates factored annually! Agriculture in the area includes rice, corn, citrus and other fruits. There is also livestock raising of thousands of sheep, goats, and camels as well as 15 major poultry farms producing 100 million eggs a year.

Al Ahsa has a dry, tropical climate, with a five-month summer and a relatively cold winter. It enjoys the benefit of copious reserves of underground water, which has allowed the area to develop its agricultural potential. Nevertheless, Al Ahsa has to deal with tons of sand, which the wind carries and deposits over the land. To counter this problem, the Kingdom has planted large barriers of trees to prevent the wind-borne sand from damaging inhabited and agricultural areas. The Al Ahsa oasis is the largest oasis in the Kingdom of Saudi Arabia and it was recently nominated as one of the Seven Wonders of the World.

In the region, Professional Connections works closely with the King Abdulaziz Medical City. It is a 312-bed facility and provides primary and secondary care to National Guard personnel with the highest quality of primary and tertiary healthcare services. 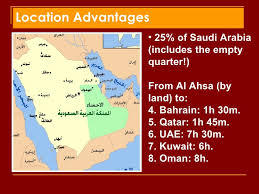 Things to do and see

Jabal Al-Qarrah is one of the most important landmarks in Al Ahsa. Standing on top of this mountain, you have will have a great view of the largest palm oasis in the world. The place is distinguished for its caves, which are cold in the summer and warm in the winter. There are also unusual rock formations to be seen.

Al Ahsa offers a wide range of culture for people living or visiting there. One should visit Ibrahim Palace, Al Ahsa Museum for Antiquities and Heritage, Al-Mulla House and Dure Site. Ibrahim Palace is the main Administrative Center of Al Ahsa province. It is located in downtown Hafouf, and is famous for its Ottoman military architectural style. The palace is open to visits and is a place surely worth popping in.

Al-Mulla House is situated in Al-Kout district and is important since King Abdulaziz stayed there after entering Al Hafouf. There, members of the elite from different groups received him and agreed on loyalty, obedience, and service to the nation. The building has been built in a traditional Arab style.

Al Ahsa Museum for Antiquities and Heritage displays the Region's heritage through different ages. One will have the chance to get to know the geographical changes the region has experienced. They will also have the chance to learn about the antiquities of the province and the Kingdom. There is an emphasis on the importance of the agricultural and commercial areas since ancient times until today.

Dure Site is one of the most fascinating places in the region. It is located southeast of Taraf in Al Ahsa and it is basically an archeological hill with foundations of dilapidated buildings buried beneath. The site appears to be an Islamic village, known as Dure, which dates back to the 9th or 10th Hijiri century (15th/16th century CE).

Al Ahsa offers also some really nice parks for people to enjoy. There is, for example, King Abdullah Environmental Park, that offers family seating places, dancing fountains, green spaces, water bodies and a Heritage Village. One should also visit Al Ahsa National Park, which has gardens, swimming pools, playgrounds and seating places. There are events organized at regular intervals for families and the youth. One should not miss the Al Jawhariah Spring either. It is one of the world-famous springs and is shaped like a large oval tub. In the spring, water flows from two side vents which calls for swimmers to take a dip.

As in so many other places in the Kingdom, there is no shortage of shopping opportunities in Al Ahsa. There are luxurious shopping centers that offer the best global brands in modern commercial complexes. The malls are also equipped with modern services and amenities. Also, for the ones looking for more traditional goods, Al Ahsa has a lot to offer. For example, Ladies' Traditional Market (most of the sellers are women) displays local handmade products and materials made from the local environment.

As for the people who are into gold products, Al Sweej Market and Gold Market is the place to be. It is one of the oldest local markets and it displays modern and traditional commodities. There is also the Gold Market that displays distinctive gold products for visitors to buy.

Al Qaisariyah Market, on the other hand, is one of the oldest and most popular markets in the east of the Arabian Peninsula. It can also be considered as the proof of Al Ahsa's high commercial ranking, since it has been the link between the Gulf Coast and inland cities. The Market has 300 shops that together form a large shopping center.

The malls offer the usual fast food restaurants, while there are also available many cuisines from all around the world. One can find everything between cheap and cheerful and the high-end eating experience. There is also a typical culture of delivering food to home. One can order food from almost every restaurant to be delivered straight home.